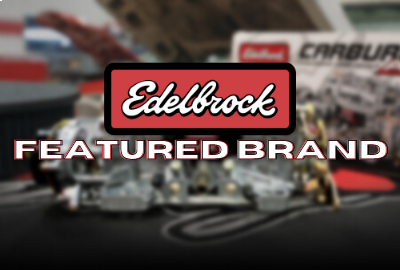 All you need to know about Edelbrock

Edelbrock is recognized as one of the top designers, manufacturers, and distributors of performance replacement parts for the automotive aftermarket industry. American-born and American-made, Edelbrock has a fascinating history that starts more than a century ago but has continued to innovate and manufacture world-class carburetors, camshafts, cylinder heads, intake manifolds, and water pumps.

The history of Edelbrock started all the way back in 1913, with the birth of its founder Vic Edelbrock Sr. in a small farming community in Kansas. After the Great Depression, Vic migrated to California and opened his first repair shop, it was here that he worked on his first project car a 1932 Ford Roadster. When Vic wasn’t happy with the performance he designed his own aluminum intake, a 180 manifold using two tromberg 97 carburetors, Vic named his creation the “Slingshot” the first-ever product to feature the iconic “EDELBROCK” name. Using the Slingshot, Vic started becoming a consistent winner at local races, leading to multiple requests for his twin carb manifold. In 1946 the first Edelbrock catalog offering performance parts for general sale was printed, and while the brand was growing in popularity, Vic’s “V8-60 equipped midget broke the winning streak of the Offy-equipped midgets” in the first-ever and only V8-60 win at the Gilmore Stadium.

After a few years of Edelbrock-equipped cars dominating dry lake racing, innovation was a no-brainer. By dyno testing, Vic Sr. manufactured the first three-carb intake, the six-carb Ram Log manifold, and achieved an industry first of getting one horsepower-per-cubic-inch from a 283 cid small-block Chevy. However, at the young age of 49, cancer tragically took the life of Vic Edelbrock Sr. and the Edelbrock Equipment Company was handed over to his son Vic Jr.

Under the leadership of Vic Jr. Edelbrock continued to grow and diversify adding exhaust systems, engine accessories, fuel system parts, and cylinder heads. Nowadays, Edelbrock has six locations all throughout the United States, including their sand-casting facility, which has been called “the most advanced sand-cast foundry west of the Mississippi.” They have a big team of enthusiasts that innovate, test, manufacture, and distribute some of the best performance parts in the nation. Living up to the legacy of the Edelbrock Company.

by PartsHawk
Posted in: Company News

Top Wiper Blades on the Market You Need